The worst combination of vanity and incompetence is to be so vain and incompetent that you are not in the least bit interested in finding out how incompetent you are, and therefore have descended from mere vanity to the depths of infernal hubris. You have proved yourself wilfully wicked.

Last year it came to the island with the premise that our bus service needed to be revamped. It didn't. That was a false premise. If you start with a false premise you cannot possibly arrive at a true conclusion. And if you are a public entity, you implement your disgusting false conclusion with a huge amount of ratepayers' money. AT wasted a fortune, and made everything worse. The contractors giggled all the way to the bank. (Note the term 'entity', because AT is not an organisation: it's a mess)

I have had long experience in fixing messes, troubleshooting, industrial-engineering, designing good methods and systems--making order out of chaos, efficiency out of waste. One of my favourite quotations is from Saul Bass, a great American designer: 'Design is thinking made visible.' Thus to fix messes you look for all the evidence of bad thinking and eliminate it.

One thing you look for, that you should look for, that you must look for, if you are to arrive at the best design, is wasted effort and inefficient use of resources. Eliminate all the waste. And be scrupulous about doing it; look for it, hunt it out; get rid of it.

But when AT revamped the bus service, one of the glaringly obvious consequences was a sudden explosion in the number of buses trundling about displaying 'Not in Service', 'Sorry Not in Service', 'Special', etc. Buses going somewhere but not picking up passengers. Thus there was a huge increase in wasted effort and wasted resources both human and mechanical.

I asked AT under the Local Government and Official Information and Meetings Act what was the total distance travelled by its buses across its entire bailiwick and what was the distance travelled displaying 'Not in Service' etc. I asked for the mainland as well as the island because over there there are also a huge number of buses trundling about displaying those signs.

What was AT's official reply? The letter reproduced below, which says that it does not keep that information (and note that it took about a month to tell me that--because if LGOIMA says you have up to a month, you take that long even if you have nothing to say). Thus AT, on its own admission, is so uninterested in finding out how inefficient and wasteful it is that it does not bother to gather that information. It guesses at 15%, but the figure on Waiheke is obviously far higher; it looks like well over 50%. 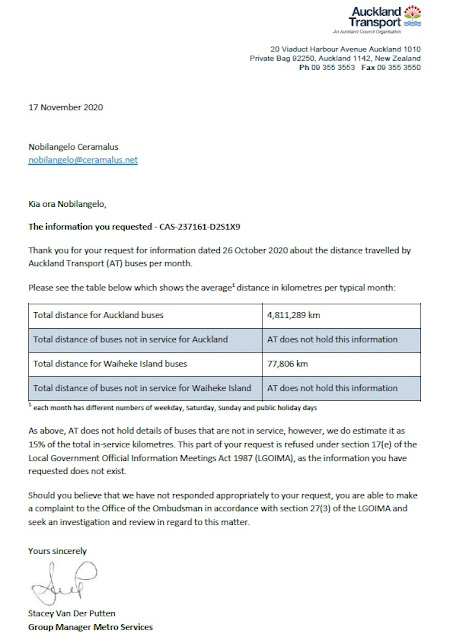