I wish these people and all ike them would give up and go away.

First they put the island through a long and expensive fight to prevent an ugly monstrosity of a marina in Matiatia Bay--a fight they rightly lost hands down. But now something even more monstrous is being proposed at Kennedy Point. Yet again it is over-the-top vandalism, this time of Anzac Bay. 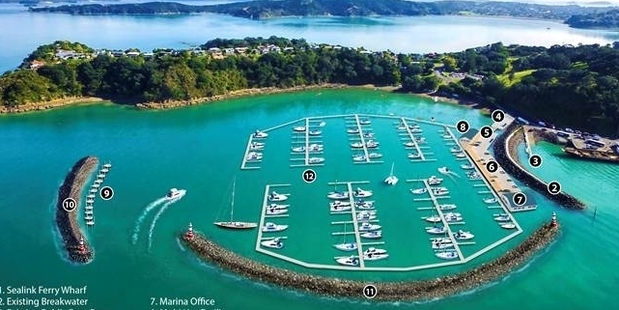 Posted by Nobilangelo at 09:21:00
Email ThisBlogThis!Share to TwitterShare to FacebookShare to Pinterest

The way our rates are calculated is grossly unfair, and in the end will kill Waiheke.
Under the New Zealand Bill of Rights Act 1990 we have the right to a fair system, because section 27 tells officialdom that everyone has the right to the observance of the principles of natural justice, which the House of Lords has ruled means 'fairness writ large.' And the rights laid down in our oldest law, the Imperial Laws Applications Act 1988, makes it incumbent on authorities not to bring ruin upon individuals or communities.
To base rates on assumed property values—which are now only rateable values with little or no relationship to actual market values—is iniquitous. It means that someone with an old bach that happens to have been built in what the market now sees as a prime location will be rated an amount that is highway robbery. Robbery by a bloated mainland regime with a highway mentality and speculators for brains.
Many islanders are asset-rich and cash-poor, because that insufferable idol 'market forces' has bestowed a high value on their property that has no relationship to their modest or minimal incomes. So they are rated out of their homes, which are bulldozed and replaced by sprawling palaces, which further increase rateable valuations in that neighbourhood, and so the vicious process continues like a Canadian wild-fire, until wonderful Waiheke has been destroyed. That process is accelerated by the fact that the palaces are often only part-time palaces, just super-baches, so the permanent community is eroded.
We know all that, but are powerless to stop it under the present regime. If we had our own council we could institute a rating regime that really would be fairness writ large, writ very large. So more strength to Our Waiheke's fight to get us back to having our own council. (In the meantime we could try getting feisty with the Super Silly and press for a fair system, and when the SS refuses, as it would, add that to our case for our own council, pointing to the way the SS has not acted in our best social, economic, environmental and cultural interests.)
We need a way of creating rateable values that would not drive out those on minimal, modest and middle incomes, and would militate against the spread of sprawling palaces. A simple way of achieving that would be to use a formula to create rateable valuations based on floor-area (and they would be purely rateable valuations, made only for rating purposes, not exorbitant 'market' valuations). Income and floor-area are well related: poor people live in modest houses not palaces; the wealthy do not live in cabins.
In such a formula the domestic floor-area would be the basis of the calculation. It would exclude external garages, workshops, livestock accommodation, etc. It would be just the home and any sleepouts (the home-space would include integrated garage-space).
Under that way of calculating rates the annual general charges would also be calculated on the same floor-areas.
So the total rates on a property would be the combination of a rate and an annual general charge, and if the formula was such that it traced out a rising hyperbolic curve for the whole island (a curve that starts fairly flat and rises ever more steeply as it assesses the sprawling palaces), the result would be eminently fair to those on minimal, modest and middle incomes, and also to those on high and very wealthy incomes. Everyone's rates would be a close match to their incomes. A thousand dollars to a billionaire is like a dollar to a pensioner widow. The floor-area basis would also discourage excessive enlargement of houses, and could be tweaked to make ones above a certain size prohibitively expensive.
A very fair formula is the one below,  in which R is the total rates and F is the floor-area described above. The first part of the formula, the bit before the plus sign, is for reckoning the rates proper, and the second is for reckoning the annual general charge:
R = 0.0005*F³ + F/.5
In words, the rates on a property would be the cube of the floor-area multiplied by 0.0005, and the annual general charge would be the floor-area divided by 0.5 (the 0.0005 and 0.5 were arrived at by experimentation, based on arriving at reasonable figures for average homes, but the most important thing is that the steepening curve produced by the cube in the first part of the formula and also by the divisor in the second part, not what multiplier and divisor might actually be used; those two just found to be good ones).
That would mean, for examples, that properties with houses with floor-areas of 30m², 50m², 90m², 125m², 300m², and 1000m² would have these rates bills each year: for 30m², $73.50; for 50m², $162.50; for 90m² (a common size for a 3-bedroom house), $544.50; for 125m², $1226; for 300m², $14,100; and for 1000m², $502,000. 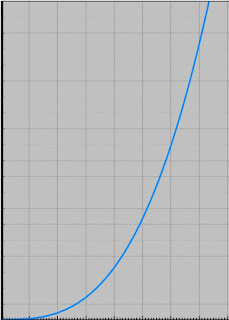 Most people would be in the lower, flat part of the exponential curve. Excessive houses would be in the upper, ever-steeper parts. (It is obvious that homes with huge areas would face rates that might be prohibitive even for billionaires, so a ceiling could be set at a certain area, at which the rates curve would flatten off.)


That system would end forever the rates regime which if left will corrode and kill our community and our way of life. That must not happen.