Click here to find the exact antipodes of where you live. 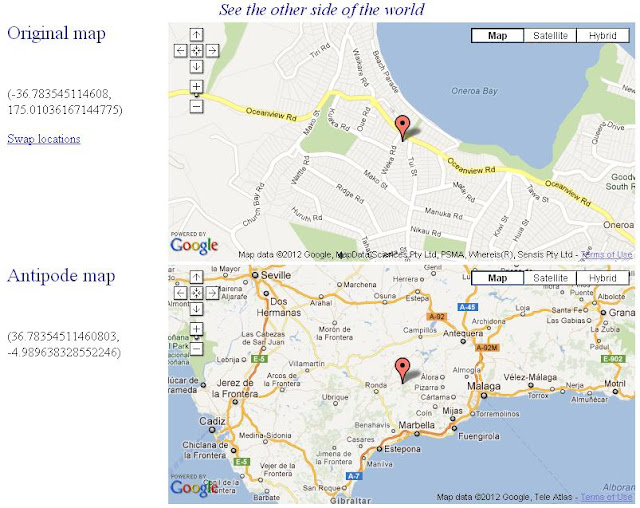 Waiheke's exact antipodes is in Spain. The illustration shows the exact antipodes of the Oneroa Post Office, so if you dug straight down from there you would come out in the Spanish countryside.

To get to the antipodes of your place, zoom out on the Original Map, move it your country, then zoom it  and move it about till you have the red pointer right where you want it.

Posted by Nobilangelo at 17:29:00
Email ThisBlogThis!Share to TwitterShare to FacebookShare to Pinterest

What it means is that three flying-fox cableswill be defacing the Waiheke sky on Trig Hill, all so that three pairs of people can ride, side by side, 'over vineyards and down into native bush' (says the Herald).

EcoZip Adventures is the outfit that wants to make a buck out of this. 'EcoZip', which sounds like something that closes the fly in your natural pants, is yet another silly notion from the buckaroo brigade. Just put Eco in front of a dumb idea and expect everyone to bow down and flock to you with their wallets wide open, showering you with their bucks.

After the suckers have trundled along the flying fox EcoZipper says there will be guides to lead people on boardwalks and tracks through the bush to its flash new visitor centre. They will teach them about Waiheke. All that will take about an hour and a half, says EcoFly/Zip/Quickbuck.

The Zip blokes say that what they are creating is a chance for anyone to get up close and personal with our native bush, to reconnect with nature.

On a wire? On boardwalks?

Have they never heard of feet? Nothing can beat walking through the New Zealand bush on the leaf-mould. Certainly not three flying foxes for two, or boardwalks. Or Zippy off-islanders telling us all about Waiheke.

Those zippies are shooting us a line. Zip it, guys.

Posted by Nobilangelo at 12:53:00
Email ThisBlogThis!Share to TwitterShare to FacebookShare to Pinterest

The full twenty-six episodes of the The Lower Deck, the over-the-top stories about Waiheke Island history, both real and unreal, can now be downloaded in a single click to your Kindle or PC from Amazon, for a mere $US2.99 (or its equivalent in the Euro, the UK pound, etc.)

Click here to go the right place in Amazon.

Episode 1 remains on the The Lower Deck blog as a free sample.

Enjoy...
Posted by Nobilangelo at 00:33:00
Email ThisBlogThis!Share to TwitterShare to FacebookShare to Pinterest

Please! A Brit with a Dubai mentality buying up for 'development' our airstrip, the so-called Waiheke Airport. We need that elitist greed landing on Waiheke, right next to a beautiful regional park, and a quiet bush-clad village, like we need a dagger in the heart.

A Big Thanks to the careless Overseas Investment Office with its right-wing anti-community mentality for giving its blessing to the purchase.

And an even Bigger Thanks to Denis Musson who dreamed up the whole filthy-lucre scheme in the first place and hocked it off for millions.

'The love of money is the root of all evil.'