ROCKY BAY THE TRUTH IN BRIEF

To set the Rocky Bay record straight with true documentary provenance for those who may have been
misled by false assumptions, or misinformation, or mischievous stories, the original Maori name of
the land that became the Rocky Bay Village was Kuakarau (spelt Kauakarau in those days). It was a
subdivision of what had been a block of Maori land called the Kuakarau Block, Block 342, plus a tiny  bit of the Whakanewha Block in the southeast corner (see the map). 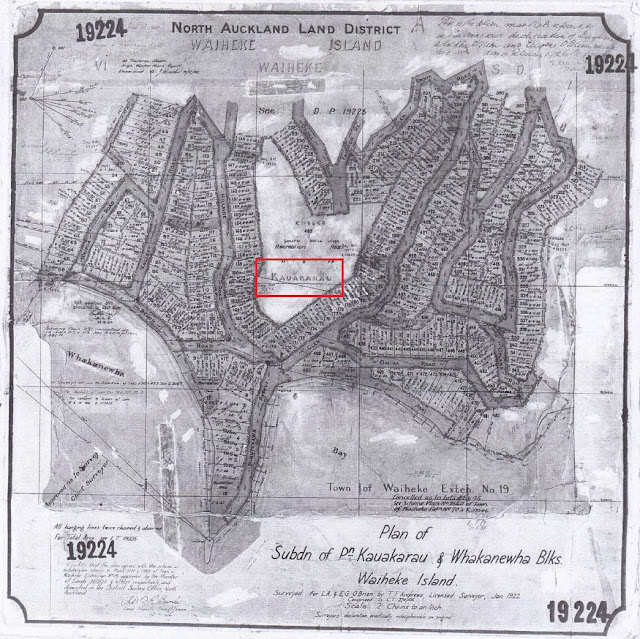 'Rocky Bay' as the name of the smallish bay where boats now bob on swing moorings first appears on a  Maori Land Court map dated 1865, and is affirmed on a Crown map dating from 1877.

When the village above Rocky Bay was formed placenames were only legal and official if they were
assigned by the Governor-General on behalf of the then Monarch, King George VI.

But 'Kuakarau' and 'Rocky Bay' were ignored by the two Europeans who subdivided the Kuakarau part of their farm. Instead, for marketing purposes, and without Royal authority, they deployed 'Omiha Bay' and 'Omiha'. And although they were 100% European they covered their marketing prospectus with Maori symbolism, which they had no blood right to.

The Maori Land Court map of 1865 accompanied a successful claim by three Maori men to
joint-ownership of the Kuakarau Block, its official name. They listed their genealogies, which the
Court carefully recorded. Nowhere is there any mention of an 'Omiha' or any name anything like it.
It was never the original Maori name; it has never been the official name; it is listed as 'Not
official' on the New Zealand Geographic Board's gazetteer.

See this blog for more details and other documentation.