The man responsible for the worse-than-incompetent, profligately-wasteful mess made of the bus service on Waiheke Island is Colin Homan, Group Manager, Networks, at Auckland Transport (AT, is a 'Council-Controlled Organisation' under the Auckland Council). 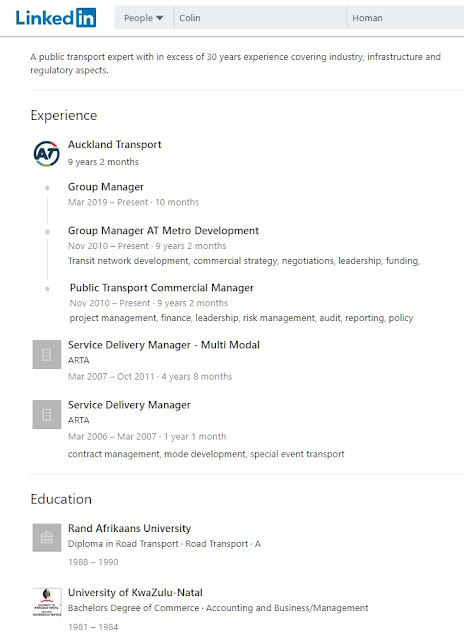 Because of the claims in his CV and the catalogue of egregious blunders on Waiheke (detailed and outlined in many other posts in this site) Mr Homan has a string of questions to answer, including:

1) The most obvious is that although he claims to be an 'expert', that is belied by that he has manifested on Waiheke Island in concrete, metal, wood, glass, plastic, LEDs, road-markings, timetables, rosters, etc. They are irrefutable proof that he is not an expert--on the contrary, because they manifest worse than incompetence. Incompetence is when a job that needs doing is done badly. Worse than incompetence is when a job is done that does not need doing, should not be done, should not even have been contemplated--and to add injury to injury may also be done badly. Mr Homan has proved repeatedly that he is worse than incompetent. He is therefore no expert. His claim is false, it is only pretence without substance.

2) His Linked In CV indicates that he emigrated to New Zealand in 2006 to take up a position at AT's precursor, the Auckland Regional Transport Authority (ARTA). For that he of course needed a visa, and to get that he had to satisfy the Department of Immigration that he had employment, and to get that employment he had to satisfy ARTA that he had the necessary experience and qualifications. He therefore gained the employment and the visa on the strength of his claims of expertise, experience, and two impressive qualifications at two South African universities. But his claim of having 'in excess of thirty years experience' puts the start of those years back in the 1980s--which is also the period in which he claims to have been at those universities getting those impressive qualifications. That juxtaposition obviously does not fit.

3) He claims 'in excess of thirty years experience,' but his CV shows only thirteen, and only in New Zealand. There is nothing at all in South Africa. Therefore there are in excess of wenty years of 'expert experience' missing from what he has recorded.

4) A mainland civil engineer told me that his company does a lot of work for AT, but can see no reason for much of it. They do it because they are asked to, but the thinking behind it is incomprehensible to them. Therefore Mr Homan's worse-than-incompetence is also manifested on the mainland. A glaring example of that seen by this writer is the bus shelter at the Greenlane Clinic, which was large, expensive, and built of permanent materials; but although there were obviously decades of life left in it it was replaced at huge expense with another just as grandiose. Why? 'If it ain't broke, don't fix it.' And certainly don't award an expensive contract to 'fix' it with public money. That is at very least the corruption of misfeasance.

There is plainly much that Mr Homan is pretending. 'Expert' is disproved by the worse-than-incompetent, profligate shemozzle on Waiheke. That together with the four points above raise the overriding question of how far his pretence has gone. Does he really have the experience and the two impressive qualifications that he claims to have from two South African universities? That is for him to answer. If those claims are false, he would have committed criminal fraud circa 2006 in his applications for employment and a visa. Only irrefutable proof of those two qualifications and that 'in excess of thirty years' experience will sweep away the questions about them. But nothing will sweep away the evidence of his worse-than-incompetence on Waiheke Island and elsewhere. Or the huge amount of public money wasted on it. Or the social damage.

Then there is the question of why there have been so many pointless, needless contracts awarded under Mr Homan. Will they all stand scrutiny? Many of them--on Waiheke Island virtually all of them--will not stand the scrutiny of logic and reason. What other scrutiny will they not stand?

Mary Anne Thompson became head of the Department of Immigration by forging her CV, claiming qualifications that she does not have.

Noone and Borlase involved a corrupt AT manager and corrupt contractor, and contracts handed out that should not have been (that sort of corruption need not be money under the table, it can for example be work done on private property without charge).

In short, is the Colin Homan situation a repeat in some way of one or both of those cases? Or is Mr Homan 'only' worse than incompetent?