INSANITY IS SPELT AT

To detail every aspect of the incompetence of Auckland Transport would fill volumes. But only a few few aspects of the recent changes they have made to the bus service on the island will suffice to prove that they are worse than incompetent, they are crazy, and they chuck vast amounts of ratepayers' money down the toilet of their profligate craziness.

Waiheke's bus service was once managed by a very good man, Ward Climo. Wardy as everyone called him is one of those golden men, a man it is an honour to know, a straightforward, down-to-earth, profoundly-caring man, and he was very good at his job.

In those days the destination windows at the front of buses showed a roll of black cloth with the destinations in bold white letters, designed by common sense to tell you quickly all you wanted to know--which is of course where each bus is going (some of the older buses still have that). They showed one of two destinations: Onetangi (via Surfdale), Rocky Bay (via Palm Beach), and, going the other way, Matiatia Ferry. Very simple, very direct. When a bus was still hundreds of metres away you could easily see if it was the one you wanted, so you could get your luggage ready and signal the driver well in advance.

Then the cloth rolls were mostly replaced with panels of LED lights that could be programmed to spell out whatever was wanted. But still the signs were kept simple, with big letters, so they were still obvious hundreds of metres away: Onetangi 1, Rocky Bay 2; and Matiatia Ferry 1 or 2 the other way. The route-numbers were large with clear space by them so that they stood out. So still, the only question---'Is that my bus?'--was answered quickly, at a considerable distance. Fine. 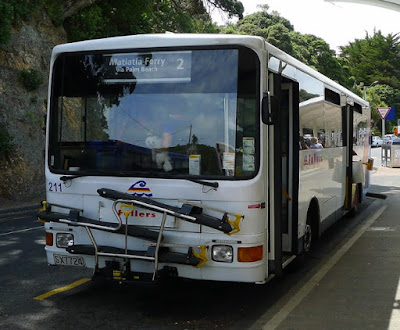 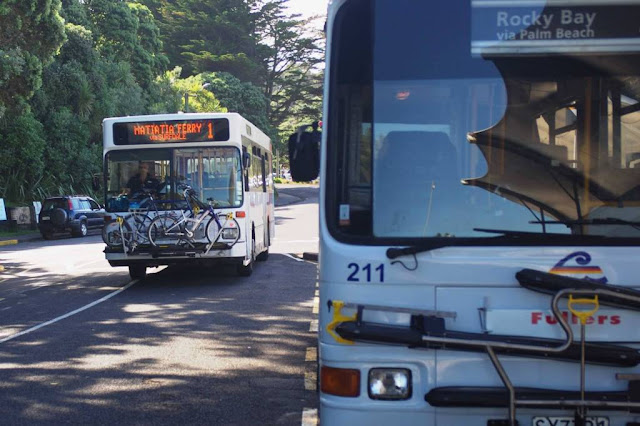 Then the Auckland Transport crazies struck, and filled the LED panels with two lines, showing the destination in smaller letters with voluminous sideways scrolling underneath that attempted to show all the main stops along the way. All useless, because the timetables showed that. Cluttering the front of buses with it was stupid. It was not the basics of good system-design: KISS KID--Keep It Simple Stupid, Keep It Direct.

But the AT crazies had not finished. Now they have piled craziness on craziness. For no reason except to manifest their excesses of craziness, they changed the simple 1, 2... to 50A, 50B, 502, 503, 504, and they packed even more 'information' into the destination windows--thus creating so much LED clutter you cannot now be sure till a bus gets almost to the stop that it is the one you want. Only then can you collect your luggage and make a signal. Or if you are a visitor you can then annoy the driver by asking where the bus is going, because they clutter is so confusing that you cannot be sure. The bus might be going to see Little Green Men on Planet 3 round Alpha Centauri for all you can discern.

But the AT crazies had not finished. The timetable data in the information sign at my bus stop has been printed in small characters, down at waist-level, not in large characters up at eye-level. Waist-level!!!!!!!!!!! I have no eyes in my navel, small or large. Few people do--a fact that has escaped the notice of the AT crazies. And above that data the sign is mainly white space, except for a meandering route-map that fails to tell passengers what they most want to know--where they need to transfer to get from the Rocky Bay route to Onetangi or to Kennedy Point. So the data you need is treated as unimportant, and white space as most important, because it dominates the sign. Why not print the timetable in nice big letters, at eye-level, and also show all the transfer information so people know how to get round the island. 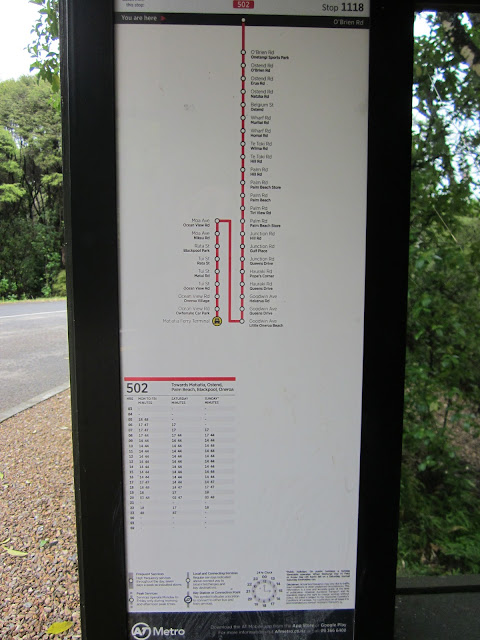 What they should have done, of course, was to have put the times bit up the top, in much larger print. And that snake down the right side, and added to it beside the Ostend stop a note to say, 'Transfer here to the Onetangi route', and beside the Oneroa stop a note 'Transfer here to the Kennedy Point ferry'. Because people want to know how to get round Waiheke; they are not just going along one bus-route to get from A to B on it. And, of course, they should not have put any of that crazy 502 nonsense. 2 is more than enough. There's other rubbish on this sign that should be scorned, but life is not long enough to go through it all. The only thing they got right was to adopt a 24-hour clock, but they have messed up how that is implemented and explained They can do nothing right even when they are right.

But the AT crazies had not finished with that sign. A couple of days later they paid someone to take it from inside the shelter and place it on a pole outside. So now to read the timetable you have to stand out in the rain, not in the shelter. It is a little higher; it is now for people with eyes in their nipples.

The AT crazies hit a zenith of craziness at another stop, the one opposite the supermarket. For ever and five days there had been a timetable fixed to that shelter. Good./ But now it has been removed and replaced by one fixed to one of the expensive, unnecessary steel posts that AT has caused to sprout all the over bus-routes. The post is 8 metres away from shelter, the expensive signs at the top are invisible because they are buried in the branches of a pohutakawa tree, which almost manages to conceal the timetable sign too Eight metres from shelter, instead of on it... Those fools are mad.

The AT crazies had not finished with manifesting their craziness in O'Brien Road. They decided to put yellow no-passing lines, single or double, at various points on the median of  the road to tell motorists not to pass. Motorists would have to be a whole bakery short of a picnic to try passing at any of those points, but bureaucratic crazies like to tell people the obvious because they are narcissistic  control-freaks who love themselves and like ordering people about. But they failed to put double yellow lines where between Te Whau Drive and Okoka Road, the only place where it could be argued that they were needed. But the crazies, being blind to the obvious, failed to see that. A little local knowledge would have told them, and told them why.

But those AT crazies were not finished. They put a huge red blob right across O'Brien Road just above the very obvious bend below Okoka Road, with 'SLOW' emblazoned across it in huge white letters, so that people would know that they had to slow for the bend. You see, without that blot on the road to distract them from the obvious they might not see the obvious: that there is a bend in the road. The road has been there for nearly a hundred years. Now it has a blob. [The 30kph signs were there only for doing the roadworks to put the blob and other things.] 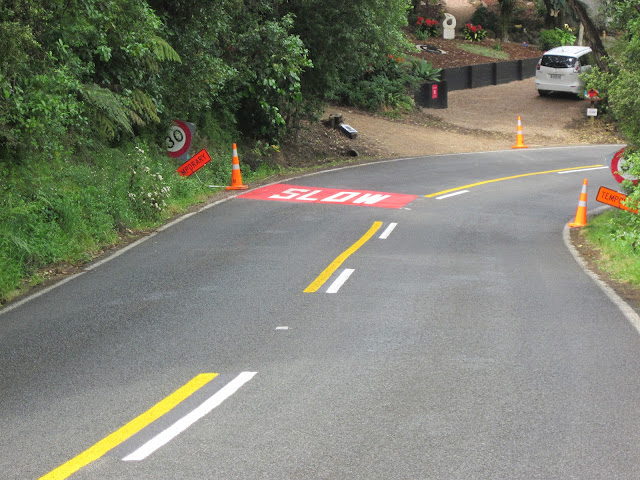 But AT's profligate crazies were not finished. For years there had been a very adequate bus-stop shelter down at the Rocky Bay.  Not flash, but cute and rustic and all that was needed. But they decided to built a flash new one at great expense. So now there are two. They even had a new sign made for the new one; they could not bring themselves to recycle the old one.

In the week the craziness was started, down at Matiatia a Class 1 Control-Freak, a damned fool of an AT bod, was ordering the buses about in the week. No, not ordering, disordering--being a thuggish bureaucrat. Because for years the bus leaving for the number 1 route, to Onetangi, was always parked first in line outside the terminal and the one leaving for the number 2 route, to Rocky Bay, was behind it, second. Very good. So you always knew where your bus would be when you came off the ferry, it was always in the same place; you could go straight to it. But the damned fool was busy forcing the drivers to go to the first spot regardless of where they were going, so sometimes that would the Onetangi bus, now renumbered by AT craziness, and sometimes it would be the Rocky Bay bus, depending on which one happened to arrive first at the terminal. So now people had to hunt about for the bus they wanted.

AT's craziness also ordered bus-drivers to wave a greeting to each other when they passed in opposite directions. Which drivers have been doing for ever and five days. 'Don't teach your grandmother to suck eggs' is an old saying and wise one. Don't be a narcissistic thug, is the blunt version. All bureaucrats are narcissistic thugs, which is why they are so egregiously stupid,

One could go on and on and on, but there is not enough space or enough life in which to detail AT's profligate, narcissistic, thuggish worthlessness.

But all this is worst than craziness. It is also thievery, because all this and a vast amount more has been done on ratepayer's money. Which explains that my rates are now ten times what they were when I came to the island twenty-two years ago but inflation has only multiplied by about 1.5 according to the Reserve Bank's inflation calculator. In one word it is chronic wickedness visited upon us by profligate fools.