A couple of weeks ago about twenty property-owners in O'Brien Road recieved an incomprehensible circular from Auckland Council. It was written in opaque bureaucratese, it gave no useful information, it talked about proposed changes in 'overlays' in our street that might affect us. That meant little or nothing to most people, because 'overlays' is a technical term used in computer geographical information systems (GIS). Worse, if we tried to get to the bottom of what was meant and went to the Internet and carefully entered the link given, it proved to be wrong. A second letter a week or so letter admitted that it was wrong and gave us a new one. But it too failed to take us to the right place. It too was wrong.

After the first one, when I called the helpdesk number given in the letter to find out what it meant, the person who answered said he had only started in the job that day, did not know, and would have to do some research to find out. A day later he got back to me, and after I had laboriously wended through a plethora of web-links at his prompting I finally found out what this 'overlay' was all about, and what it would mean if the Council's bureaucrats were successful in imposing it via their new Unitary Plan.

Here is a screenshot of the map: 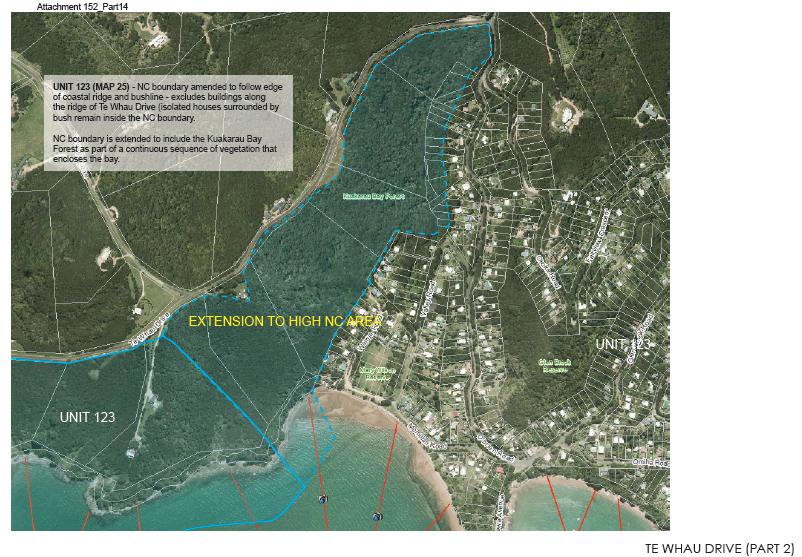 As you can see, meandering through all the properties near the top of the bluish overlay, from a little below
the intersection of Te Whau Drive and O'Brien Road to about halfway down O'Brien Road, is a bluish dotted line. The area bounded by it is what the bureaucrats have determined is to have new zoning rules, and have applied for them in the new Unitary Plan. It covers the public forest (the Kuakarau Bay Forest Reserve), which is fine, but it also 'overlays'--read 'imposes'--draconian changes in the rules that govern what all those property-owners are permitted to do in 25% to 90% of their own properties. What they could do as of right would be slashed.

At present, under the existing District Plan, they are permitted, as of right, to build a dwelling with a floor-area up to 10% of the area of their section. So someone with 1000 square metres of land is permitted, without a resource consent, to build a 100-square-metre house, up to 8 metres high.

But if the Council's big blue becomes law, that would be slashed, regardless of the size of the property, to a 25-square-metre dwelling. A shed. No more than 5 metres high. Worse, that would apply only to the blue area. So one part of your property would have one set of rules, the other an entirely different set. That would obviously have a big effect on many lives, as well as seriously affecting values, and therefore mortgages.

A senior planner in another part of the Council empire said that under Section 85 of the Resource Management Act and the case-law arrived at under it, it is illegal to unreasonably restrict development on private land.

What is reasonable is obvious: it is what has been decided during the democratic process that arrived at the District Plan. Thus anything that kneecaps the District Plan is illegal, and therefore one part of the Council is trying to impose what another part knows is illegal.

How silly that line is is underscored by the fac that down the bottom it includes a chunk of the sea. So the most anyone would be permitted to build in the sea in that area would be a shed!!!

For those who affected who want to add their voices to fighting this folly, cross-submissions can be made online. The relevant Council submission is 5716-222. This link will take you to where you can select the form.